The method assumes that forces due to grounding are buoyancies applied at the points of grounding. These buoyancies are derived by treating the ground as a very dense liquid.

In the case of the water buoyancy, the displaced volume of water (which also depends on the exact shape of the vessel) determines the magnitude of the force. In the case of the grounding buoyancy, the mechanics may be quite different. However, if the "density" of the ground is very great relative to the density of the water, then for a given increment of weight on the vessel there will be little penetration into the ground relative to the sinkage which would take place due to the same weight increment if the ground were not present. In other words, this model effectively "stops" the vessel from sinking much further when it hits the ground (which is all it needs to do) even if the exact mechanics of the "grounding buoyancy" are not precisely modeled. When a weight is added to the vessel after it is aground, nearly all of the opposing buoyancy required to support the weight comes from the ground. In order to achieve this, the only requirement is that the ground buoyancy vs. penetration function be steep relative to the water buoyancy vs. sinkage function. 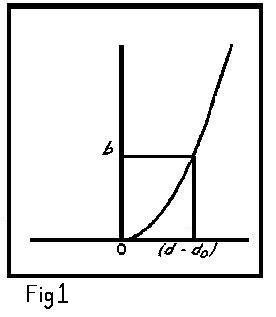 The constant C is chosen such that the buoyant force becomes sufficiently large to "stop" the vessel so that it sinks not very far into the ground.

GHS assumes that "not very far" means a small distance relative to the size of the vessel. If the user allows GHS to select the value of C automatically, it selects a value which would produce a buoyant force equal to the entire weight of the vessel if the ground/vessel penetration were 0.2% of the length of the vessel. The user is free to provide a different value, as will be shown below.

Note that this is one of the simplest ways of meeting the requirement that the grounding buoyancy respond sharply to the penetration. It is not intended to model any other characteristic of the ground/vessel interaction. Unlike real ground, this model springs back when the penetration is reduced: the same buoyancy appears at the same penetration regardless of whether it is approached from a lesser or a greater penetration.

While this contribution to the effective waterplane area makes it possible to derive the usual weight-to-immerse, center of flotation and GM values in a grounded condition, these values have large changes for small changes in the vessel's draft, trim and heel due to the nonlinearity of equation 1.

The number of grounding points required to model a particular grounding will, of course, depend on the details of the situation. GHS allows as many as 400 grounding points. Note that a single grounding point may be sufficient to represent a large area of contact with the ground. The location of the point should be close to the center of such an area.

The b parameter is the magnitude of the buoyancy due to the grounding point at the present water depth. Therefore, the waterplane must be set up to represent the grounded condition before the ADD command is issued.

It may seem that there is a difficulty with this method, since the value of b will seldom be accurately unknown. However, due to firmness of the ground, an error in the initial specification of b will usually not have significant consequences. Note that the b value given with the ADD command is only at the present depth. As soon as the depth changes, the value of b automatically changes also. Therefore, if the given value is too small, the vessel will settle down to a slightly deeper draft. If the given value is too great it will rise up a bit until the ground reaction makes up whatever buoyancy is missing from the displacement of water. But the change in draft required will often be relatively small compared with the accuracy required in the analysis. If a more precise result is required, a two-step process may be used wherein the initial estimate of b is refined after the equilibrium value is found.

As with other adjustments to the state of the vessel, GHS does not adjust the waterplane (draft, trim and heel) until instructed to do so. Thus the procedure is to issue one or more ADD /GR commands followed by a SOLVE command to find equilibrium. After that, a STATUS command may be given to examine the magnitude of the ground reaction at each grounding point.

If the firmness of the ground which GHS automatically assigns "by default" is inappropriate, an additional parameter may be given. For example,
tells the computer that an estimated 100 weight units of ground reaction is located at the center keel 75 length units forward, and that the penetration into the ground at that point is 2.0 length units. Referring to equation 1, this means that
therefore C = 25.0.

Thus the ADD command has had the effect of specifying the value of C for that grounding point. (Other grounding points may use different values of C.)

The firmness of the ground in this example is at its "default" value. If it is necessary to specify the firmness when the grounding point is above the ground, an additional parameter may be given. For example,
In this case, the 3.0 is the "maximum" penetration, which is defined as the penetration which would occur if the entire weight of the vessel (except tank loads) were pressing at that point. When making such an estimation, it should be remembered that a ground point represents the middle of an area of contact, and the size of the area may increase with the penetration.

It should be clear that unless the ground is unusually soft, great accuracy in the setting of the ground firmness is not ordinarily necessary.

Comparison with the Negative Weight Method

A traditional method of representing a ground reaction is to locate a "negative weight" at the point of grounding (GHS is still able to apply this method also).

While the same ground reactions can be simulated with either method, the "negative weight" method has limited usefulness for ascertaining stability when grounded. This is due to the inability of the negative weights to respond to changes in the trim or heel of the vessel.

While the GM calculated with a negative weight is valid for single-point grounding where the point of ground contact happens to be under the center of flotation, it is less valid in other cases. On the other hand, the positive buoyancy method, by contributing to the waterplane properties, results in a GM which is theoretically valid, though it may change very rapidly due the inherent nonlinearity of the ground forces.

Another advantage of the new method is that the distribution of the ground reaction among several grounding points is automatic. 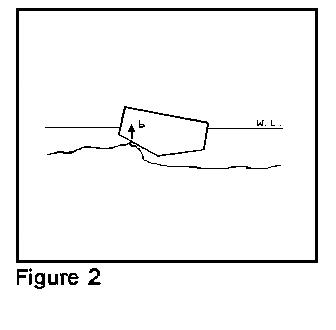 Consider a case of single-point grounding where the grounding point is to one side of the vessel (see figure 2). For some range of heel, the vessel would have to pivot on the point of grounding, after which it would float free. The angle at which it would float free would depend on the direction of heel. This is exactly the behavior which GHS would simulate with a single grounding point. The followi ng series of commands could be used:
This produces a series of status reports from 25 port heel to 30 starboard heel, each report showing the ground reaction and righting arm.

Consider a two-point grounding case as illustrated in figure 3, and assume that longitudinal strength is to be checked. The following commands provide the answer:
Setting Depth and Changing Tide 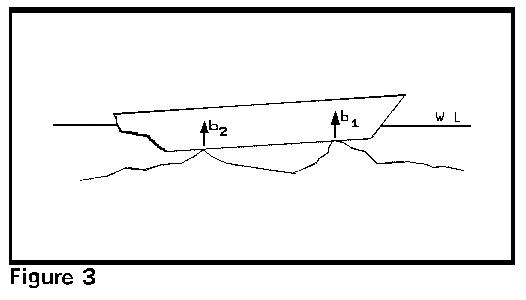 In a salvage situation, when the stranded vessel is not on an even keel, it may be necessary to set the vessel's depth by means of a measurement taken at some point on the hull which is not near the ce nterline; hence it would inconvenient to use the DEPTH or DRAFT command. In such a case, the new HEIGHT command is useful. The HEIGHT command takes the height of a Critical Point relative to the water measured perpendicular to the waterplane. Hence, any convenient point on the vessel may be used to establish its depth or draft. For example,
where d is the distance from critical point #1 to the water (positive if above the water, negative if below the surface).